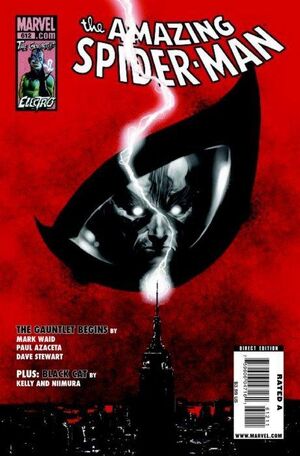 Appearing in "Power to the People: Part One"Edit

They’re Hunting Spiders…THE GAUNTLET begins here The event that redefines Spider-Man's classic arch-enemies one by one starts with one of his deadliest - Electro! Destitute and desperate, conned out of his life's meaning and worth-Max Dillon becomes the voice of the common man against the brutal injustice of a system overloaded by greed. With Spider-Man already looking over his shoulder. Mark Waid and Paul Azaceta bring you the story of a hero with everything to lose against a man with nothing left to gain. Prepare for death’s short, sharp shock. Prepare for Electro.

Appearing in "The Other Woman"Edit

Synopsis for "The Other Woman"Edit

Retrieved from "https://heykidscomics.fandom.com/wiki/Amazing_Spider-Man_Vol_1_612?oldid=1750240"
Community content is available under CC-BY-SA unless otherwise noted.