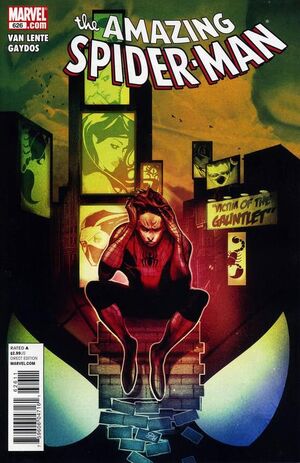 Hiya, Retailers, Fred Van Lente here to tell you we could never let "The Gauntlet" get by without the return of another classic Spider-Man foe...THE SCORPION! She has brand new powers, a new modus operandi, and you won't believe her reason for tangling with Spidey-- Hm, what? Yes, we said "she." Why? Who did you think we meant?

Retrieved from "https://heykidscomics.fandom.com/wiki/Amazing_Spider-Man_Vol_1_626?oldid=1407736"
Community content is available under CC-BY-SA unless otherwise noted.