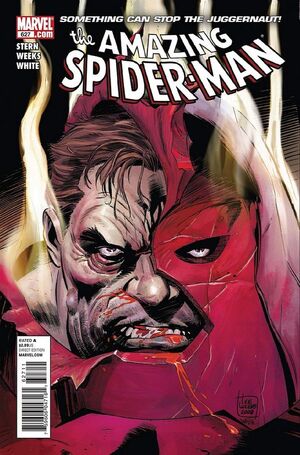 Appearing in "Something Can Stop the Juggernaut?!?"Edit

"SOMETHING CAN STOP THE JUGGERNAUT! PART 1" When a pounding Spider-Sense headache leads Spider-Man to the comatose body of his biggest, toughest foe, he realizes that something -- or someone -- can indeed stop the Juggernaut! But who? How? And who are they coming for next? Can Spider-Man find out before it's too late? And will Peter Parker ever get to have dinner with Carlie Cooper? Roger Stern and Lee Weeks (AMAZING SPIDER-MAN #580) return to unravel the mystery in the first part of the Spider-Man/Juggernaut Trilogy.

Retrieved from "https://heykidscomics.fandom.com/wiki/Amazing_Spider-Man_Vol_1_627?oldid=1730449"
Community content is available under CC-BY-SA unless otherwise noted.