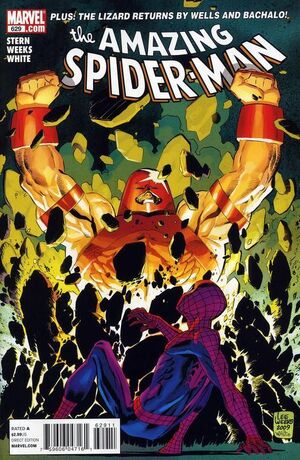 Appearing in "With Greater Power..."Edit

“SOMETHING CAN STOP THE JUGGERNAUT, PART 3" Spider-Man and Juggernaut are trapped in an unearthly realm by a being of mind-bending power. But who is their tormentor? What's his connection with Spider-Man? And why does he hate the Juggernaut? All is revealed in a final showdown that threatens to shake Manhattan to its very foundations -- and brings the Spider-Man/Juggernaut Trilogy to a fateful conclusion! Whatever else you do this week, you dare not miss "With Greater Power…!" It's Marvel History-in-the-Making by Stern & Weeks! Plus, a prelude to the Return of the Lizard by Zeb Wells and Chris Bachalo.

Retrieved from "https://heykidscomics.fandom.com/wiki/Amazing_Spider-Man_Vol_1_629?oldid=1747851"
Community content is available under CC-BY-SA unless otherwise noted.