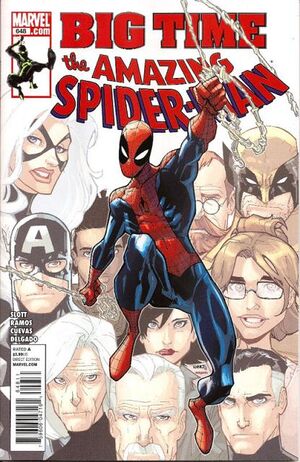 BIG TIME BEGINS! Big changes are happening for the Amazing Spider-Man: Bigger threats, bigger guest-stars, and a big opportunity that could turn Peter Parker’s life around! Which cast members are staying and who’s saying goodbye? Find out as we’re introduced to new characters and reintroduced to a number of Spidey villains as they make the triumphant return to the book! Plus: New developments for Mayor J. Jonah Jameson, the staff at Front Line, and The Sinister Six! The next chapter in Spider-Man history starts here! Guest starring THE AVENGERS and THE FANTASTIC FOUR in a giant-sized, 39 page lead feature! PLUS! An All-New Adventure featuring the All-New SPIDER-GIRL! PAUL TOBIN & CLAYTON HENRY bring a tale of action & intrigue, and make a strong argument for why you can sometimes send a Spider-GIRL to do a Spider-MAN’s job…

Appearing in "The Girl's All Right With Me..."Edit

Synopsis for "The Girl's All Right With Me..."Edit

Retrieved from "https://heykidscomics.fandom.com/wiki/Amazing_Spider-Man_Vol_1_648?oldid=1747942"
Community content is available under CC-BY-SA unless otherwise noted.