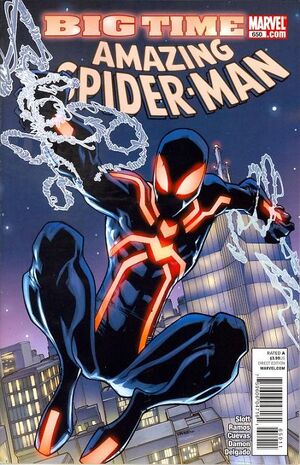 To face off against an amped-up HOBGOBLIN, you need an amped-up SPIDER-MAN! What's the story behind Spidey's NEW SUIT? What is it and what can it do? Meanwhile, MACH 5 (from THE THUNDERBOLTS) faces off against one of Spidey's deadliest foes! All this, and a secret side mission for THE BLACK CAT. Plus an additional 8 page story: We showed you who was behind the HOBGOBLIN'S mask last issue. But what were they up to BEFORE their startling return? Here's where you find out!

Retrieved from "https://heykidscomics.fandom.com/wiki/Amazing_Spider-Man_Vol_1_650?oldid=1729900"
Community content is available under CC-BY-SA unless otherwise noted.