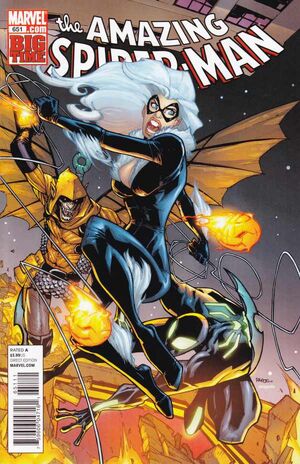 The HOBGOBLIN'S fight for power continues! Which side will SPIDER-MAN and the BLACK CAT be on... and why? Also: a surprise for AUNT MAY, and the SPIDEY versus KINGPIN rematch you've been dying to see! Included in this issue: an 8 page story featuring the return of Mac Gargan... as THE SCORPION!

Appearing in "The Sting That Never Goes Away"Edit

Synopsis for "The Sting That Never Goes Away"Edit

At Alistair Smythe's hideout, Mac Gargan finds himself in a new Scorpion suit as Alistair runs some tests on him through combat training. He reveals to Gargan that his new suit is designed with cybernetic enhancements that are keeping him alive since he no longer has the symbiote. Smythe also reveals that Gargan now has a "Scorpion Sense" which is very similar to Spider-Man's Spider-Sense that allows him to sense danger due to the suit's mechanical abilities. Smythe reveals that his plan is to get revenge on Jonah Jameson since he made both of their lives miserable and reveals that he has arranging on creating new biological Spider-Slayers to target Jameson since he is now the mayor, as well as his friends and loved ones.

Retrieved from "https://heykidscomics.fandom.com/wiki/Amazing_Spider-Man_Vol_1_651?oldid=1637734"
Community content is available under CC-BY-SA unless otherwise noted.