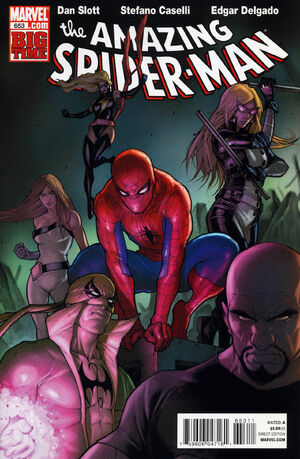 Appearing in "Revenge of the Spider-Slayer (Part two): All You Love Will Die"Edit

REVENGE OF THE SPIDER-SLAYER Part 2 of 3 “All You Love Will Die” The SPIDER-SLAYER’S assault escalates as his INSECT ARMY descends on Manhattan! No one in Spidey’s life is safe—from the offices of the Daily Bugle to the Mayor’s staff at City Hall! It’s way more than our wall-crawler can handle. Good thing he’s also a member of the NEW AVENGERS! Guest-starring LUKE CAGE, JESSICA JONES, MS. MARVEL, MOCKINGBIRD, IRON FIST… and a few surprises.

Retrieved from "https://heykidscomics.fandom.com/wiki/Amazing_Spider-Man_Vol_1_653?oldid=1652707"
Community content is available under CC-BY-SA unless otherwise noted.