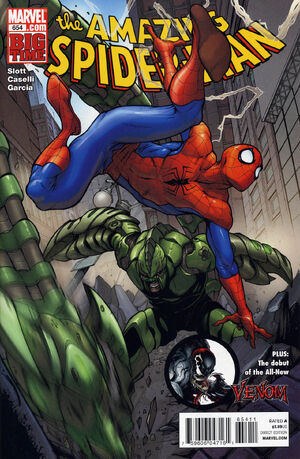 Appearing in "Revenge of the Spider-Slayers Part Three: Self-Inflicted Wounds"Edit

One of the most pivotal moments of the SPIDER-MAN "BIG TIME" era happens here. Other comics promise you their issues will "Change Everything" or that "Nothing Will Ever Be The Same." No carnival barker-like pitch this time. Just the plain, simple truth: This issue of AMAZING SPIDER-MAN will have repercussions for Peter Parker and this title's cast for years and years to come. Guest-starring THE NEW AVENGERS. Also in this issue: We finally reveal what has become of the alien symbiote. And a dramatic change to Spider-Man's powers. Do NOT miss this issue!

Flash is in the new Project Rebirth Headquarters in Washington DC where Aaron MacKenzie is hooking him up to some sort of chair. Flash is being briefed by General Dodge that he will be perfect for this experiment because he risked his life and limbs to save his unit, and that his dog Samson likes him, and Samson is a good judge of character. Flash tells him that he is honored, but he doesn't like the idea of Project Rebirth 2.0 because he likes Spider-Man more than Captain America. MacKenzie then tells Flash that that is another reason he was chosen, and the Venom symbiote is shown in a tube attached to wires in the chair. The symbiote attaches to Thomson, who easily takes control of it and creates legs for himself and a new look. He is now the new Venom since the Scorpion is back to his own name. Flash is also given the Multi-Gun, a gun that can transform into any form of a firearm. Flash is then introduced to Katherine Glover, who will oversee all 20 missions Flash has as Venom. He tries to charm her, when she says that he is dating Betty Brant, she can take him out with her own military training, and that she can also take him out by nuking his brain if the Venom symbiote takes control. The symbiote is contained once more, and after Flash leaves, Katherine and the General discuss how Flash was the second candidate for Rebirth 2.0, and that a man named Cal Henriksen had his brain nuked.

Retrieved from "https://heykidscomics.fandom.com/wiki/Amazing_Spider-Man_Vol_1_654?oldid=1652708"
Community content is available under CC-BY-SA unless otherwise noted.