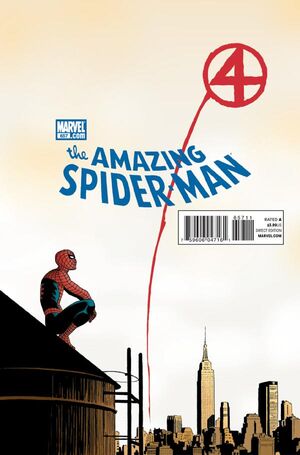 -- Spider-Man, after getting caught in the Baxter Bulding's security system.

As they drank coffee, the four talked about their adventures with Johnny. Ben told the story of Spider-Man and the FF fighting Krakatoom in the forest. Spider-Man covered him in webs, while the Fantastic Four used their powers to dissipate him. Later, Spider-Man agreed to stay and camp with the Four. Spider-Man and Johnny played pranks on one another, eventually playing a prank on Ben together.

Reed then told the story of when he and Johnny invited Spider-Man for the launch of their new "faster than light" skiff. Traveling through space, the three found a green star going nova, which Reed dubbed the "Banner Nova." The ship broke down, so Spider-Man and Reed went to repair it while Johnny protected them from the radiation. They barely managed to repair the ship all due to Johnny's insight on engines, and they escaped. Later, Johnny expelled all the energy he absorbed from the star at a safe distance while Spider-Man remarked that "He really is a bright guy."

Later, Reed showed Peter the very end of Johnny's recorded video. In it, Johnny told Peter that he was sorry for dying, because he knew how death affected him. However, he left Peter his most prized possession: his spot on the team and in the family. Johnny's hologram joined hands with Reed, Sue, Ben, and Peter, with one final "Got ya" uttered from Johnny.

Following up on the shocking ending to February’s issue of FANTASTIC FOUR, SPIDER-MAN visits the FF for a very private wake—just for family.

Retrieved from "https://heykidscomics.fandom.com/wiki/Amazing_Spider-Man_Vol_1_657?oldid=1407767"
Community content is available under CC-BY-SA unless otherwise noted.