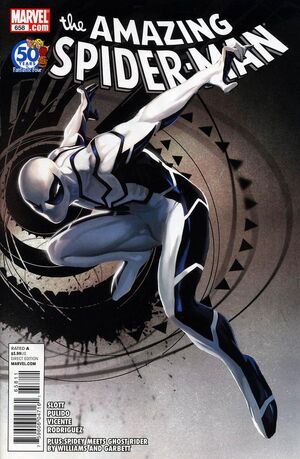 Appearing in "Can't Get the Service"Edit

Synopsis for "Can't Get the Service"Edit

Spider-Man is patrolling Manhattan when he notices people screaming and running from a bar. He also notices Ghost Rider's bike outside. Spider-Man comes inside and joins Ghost Rider for a whiskey (Spidey gets milk), where Ghost Rider discusses what he wants to do now with his life. Suddenly, the only other person in the bar (besides the bartender), reveals himself as a similar spirit of hell, the Servicer. The Servicer tells Ghost Rider that the motorcycle has not been used for its intended purpose, the collection of souls for hell, and that he will need to service it. Ghost Rider throws his chain at the Servicer, only to get sucked inside his chest. Right before this, Ghost Rider tells Spider-Man to take the bike. Spider-Man gets on, and then the bike takes control, zooming throughout the streets of New York.