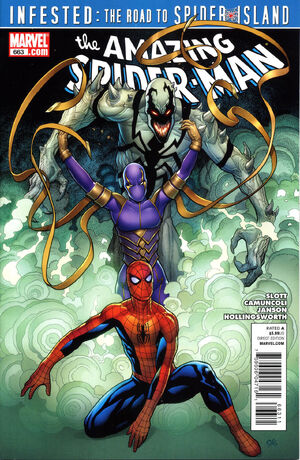 Appearing in "The Return Of Anti-Venom, Part1 - The Ghost of Jean DeWolff"Edit

“The Ghost of Jean DeWolff”

ANTI-VENOM returns to help SPIDER-MAN wage war against MISTER NEGATIVE and his criminal empire… whether Spidey wants him to or not. And when an all-new WRAITH enters the fray, will she prove to be a friend or foe? Plus: From the pages of SECRET AVENGERS, a special guest appearance by SHANG-CHI, The Master of Kung Fu! PLUS: "Infested" continues in...the lead-in to SPIDER-ISLAND

Appearing in "Infested stage 4: Out of Nowhere"Edit

Synopsis for "Infested stage 4: Out of Nowhere"Edit

Retrieved from "https://heykidscomics.fandom.com/wiki/Amazing_Spider-Man_Vol_1_663?oldid=1639278"
Community content is available under CC-BY-SA unless otherwise noted.