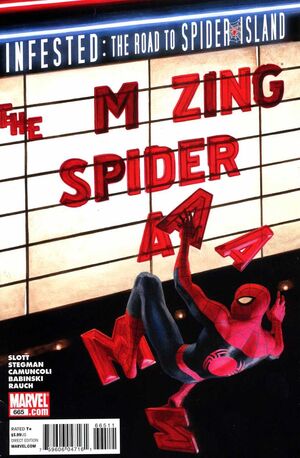 Appearing in "Infested: The Road to Spider-Island - Crossroads"Edit

“INFESTED” ENDS WITH SPIDEY AT THE “CROSSROADS”

As Spider-Man, he’s a member of the FF and TWO different Avengers teams. As Peter Parker, he works all hours on his dream job at Horizon Labs. That doesn’t leave him with much time for anything or anyone else. This is where he pays the price. In this landmark issue, one of Peter’s greatest sins-- comes back to haunt him. And the life of someone dear to him hangs in the balance. Plus: With New York’s Infestation complete, the run-up to Spider-Island is over. Prepare for hell to break loose.

As she reflects on her memories regarding Peter's early days of living in her house in Queens, while having Peter, Carlie, and Jonah over for dinner, May announces they had a ulterior motive for inviting them over. Jay sternly tells them that he and May are putting the house up for sale and moving to Boston for their own safety since the recent incidents had made them realize that it is too dangerous to remain in New York. During the moving, as he and the Watsons are helping May and Jay with packing the moving van, Peter and MJ reflect on the many incidents that happened around the house over the years. Later, as Peter is saying goodbye to his Aunt May he gives her a Boston Red Sox cap as a parting gift.

Retrieved from "https://heykidscomics.fandom.com/wiki/Amazing_Spider-Man_Vol_1_665?oldid=1637809"
Community content is available under CC-BY-SA unless otherwise noted.