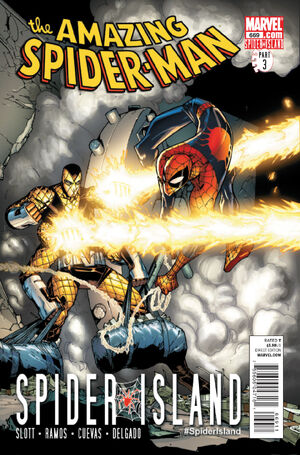 SPIDER-ISLAND PART THREE The Infestation has spread Big Time! How can the heroes of NYC hope to contain millions of spider-powered New Yorkers? A dangerous new role for Venom. And... is that a Six-armed Shocker?! All this plus: One of Spider-Island's biggest mysteries revealed! Who is this threat from Peter Parker's past?! And What is their involvement in all of this?! PHEW! This is a whole lot of comic!

Retrieved from "https://heykidscomics.fandom.com/wiki/Amazing_Spider-Man_Vol_1_669?oldid=1731050"
Community content is available under CC-BY-SA unless otherwise noted.