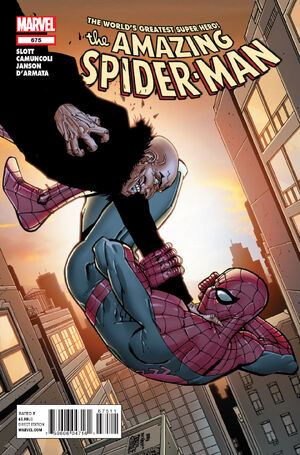 Peter and Carlie break into the police station to examine Wormwood's body. As they examine, Peter takes his mask off but Carlie is frightened by it and asks him to put it back on. Meanwhile, the Vulture is telling his robbers that they have to make an air robbery on a helicopter. He then explains to Michael the story of Cormorant: A fisherman strapped a collar to its neck which prevented it from eating the fish. The fisherman would then take it off at the end of the day and gave it one fish as a reward.

Leaving, Michael looks at Glory but Lewis tells him to back off. Angela Death attacks him. Glory is about to help him, but Mary Jane says they're dangerous. Meanwhile, in the morgue, Peter and Carlie examine the bodies and find that they all have an ultraviolet "W" imprinted on their arms. The robbers then attack the helicopter and take the collection. Michael, however, secretly smuggles two gold coins in his pocket.

While Carlie and Spider-Man are looking at the robbery locations, MJ calls and tells him that Lewis was beat up at the Wake.

Retrieved from "https://heykidscomics.fandom.com/wiki/Amazing_Spider-Man_Vol_1_675?oldid=1637828"
Community content is available under CC-BY-SA unless otherwise noted.