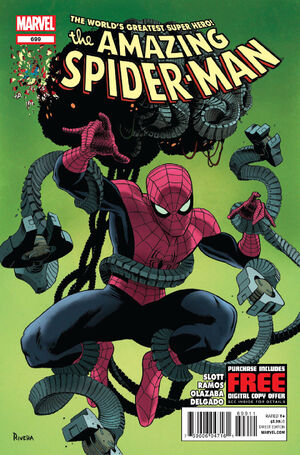 • This is the MUST READ issue that turns over all the cards and reveals secrets that have been set as far back as ENDS OF THE EARTH, SPIDER-ISLAND, and 99 issues ago in ASM #600!

• Doctor Octopus has hours left to live. He knows Peter Parker’s secret. He has no master plan—all he wants is vengeance. Which members of Spider-Man’s rogues gallery will heed Ock’s call to arms?

• Special appearances by the Lizard, the Spider-Slayer, Morbius the Living Vampire, and some surprising Spidey Foes!

Retrieved from "https://heykidscomics.fandom.com/wiki/Amazing_Spider-Man_Vol_1_699?oldid=1729906"
Community content is available under CC-BY-SA unless otherwise noted.