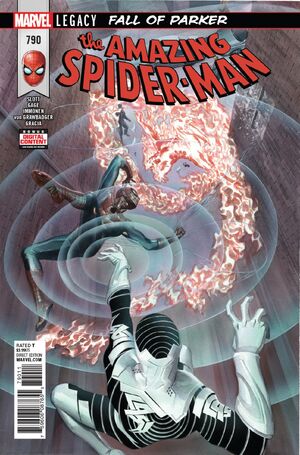 It's like, I'd finally gotten everything right for once, y'know? I was pushing science forward! Helping around the world, as both Spider-Man and Peter Parker. This is what I'd been working toward my whole life! Of course I managed to blow it all up.

At Parker Industries, Peter and Harry deal with dismissing every individual who worked there, and is now out of a job because of the Industries' failure. After that, they find outside the doors of the building a crowd protesting against Peter, who dashes off as Spider-Man because he can't take the hostility anymore. Unusually, in fact, Spider-Man is a much more confortable persona than his real one.

At the now closed Beyond Forever Nightclub, Clayton Cole (a.ka. The Clash) is discussing with some thugs about taking back from Parker his own inventions, instead of letting him sell them off to pay the society's debts. He dismisses his subordinates' idea of taking other stuff as well, but agrees to pay them more than usual because their target location is one of the most secure in the world: the building today known as Parker Industries New York, and once the home of the Fantastic Four, the Baxter Building.

At the Baxter Building, Johnny Storm (the Human Torch and, alongside Ben Grimm, the only member of the F4 around on Earth) is arguing with Harry Lyman about the decision to sell the place to cover the PI's debts. Harry calls Peter, who's feeling good helping people with routine errands and feeling bad seeing how his image as Peter Parker is infamous around town. Peter (as Spider-Man) arrives in loco and tries to explain to Johnny his reasons, with the only result of irritating him even more and activating his flame body. Torch attacks Spidey with flames, reminding of his promise to keep the Baxter Building safe until the Four were ready to come back. Peter is tired of people accusing him, so he says he did his best and to come at him if so he wants.

While Spidey and Torch fight and Harry tries to tame them, lest they destroy the building he's trying to sell, Clash and his men walk to the tech deposit undisturbed, as the security is watching the other scene. Clash takes his Sonic Transducer and is ready to go, but Harry realizes what's going on and stops the two heroes from continue fighting to get the situation under control.

Spidey and Torch catch up with Clash, but some of his men, intentioned to get away with more than just their boss's inventions, accidentally activate a self-recharging power source, getting it stuck in an upward cycle: if no-one powers it down, Spidey says, it will blow up the entire block. Clash starts working on it with null frequencies, but Spidey stops him and explains what they need are harmonic frequencies. Clash is surprised that Peter Parker's mere "bodyguard" is so learned about science, but Spidey cuts him short saying they need to trust each other now, not to die.

With the three superhumans working together, the crisis is averted, but as Spidey catches Clash's associates, the villain himself manages to run away and disappear. Spidey is okay with Clash getting away with it, as he did help after all, but Harry gets there and declares he's done with this whole situation, leaving.

Even though Johnny is still mad at Peter, he understands he now needs a friend, so they go eat on top of the Baxter Building like in good old times. Johnny says Peter did nothing wrong in the collapse of his Industry and suddenly Peter gets a call from Joe Robertson: they want him back at the Daily Bugle, this time as a science expert.

Down on your luck Peter Parker is back, for good or ill. New York has changed, and so has Peter – but entering a new phase of his Spider-Man life isn’t easy; neither are new relationships OR new foes. Peter Parker is not the Spider-Man you remember, but why is he taking his fight to THE DAILY BUGLE? And what happened to PARKER INDUSTRIES?