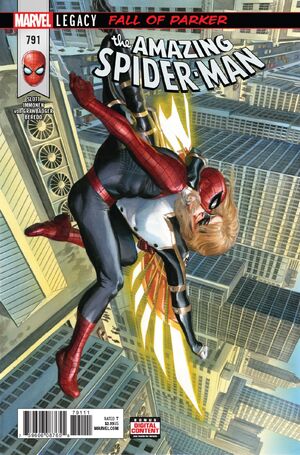 This is a new beginning for you. A fresh start.

Appearing in "Fall of Parker: Part 3 -- Back to Ground"Edit

Synopsis for "Fall of Parker: Part 3 -- Back to Ground"Edit

At The Waterfront, Spider-Man and Mockingbird take out a band of thieves who were trying to break into some shipping containers: in the process, Peter lets her know he's gotten a new job.

Back to Bobbie's apartment, Peter still chooses to sleep on the couch as he needs to stay focused and be ready for next morning's first day at the new job, "the perfect job", as he calls it. The next morning, Peter takes everything he needs and goes to work as Spider-Man, since he hasn't felt comfortable in his Peter Parker persona as of late, what with the fall of Parker Industries and his subsequent drop in popularity.

At the Bugle, the whole Science Section is ready for the weekly staff meeting and Peter arrives just in time from a secondary entrance. Robbie Robertson calls him in his office, explaining to him his duties and how it's not necessary for him to be present at all times, as long as the weekly insertion is done. Peter's introduced to his colleagues, who start to feel like he got the job only out of a previous connection to Robertson, which is actually true.

In Upstate New York, at the Humanitech Robotics Inc., Bobbie Morse (a.k.a. Mockingbird) is being complimented by the company's CEO, Xander Zynn, because of her work on the security system. A scientist complains that for some reason the androids produced there started to use only a female voice, with Bobbie -a convinced feminist- arguing that all famous A.I. are female. Peter calls her, so she offers him a tour at the company for his scientific weekly publication at the Bugle.

Peter and his co-workers attend the tour of Humanitech Robotics and are able to watch in action the multifaceted abilities of the droids, who'll be in every house in the near future, according to Zynn. Looking at some readouts on a screen, Peter realizes that the A.I. program looks like brain patterns, which Zynn confirms. Peter is confused: how is an affordable production of droids based on unaffordable studies and parts? As Colin, one of the Bugle's writers, tries to open up one of the droids, the robot attacks him and he's saved by Peter's superstrength. Zynn gets infuriated and orders them to leave.

Peter and Bobbie are made suspicious by what happened, so they come back as their superhero alter-egos at night to investigate. They have no problem infiltrating the compound because Bobbie is the responsible for their high-tech security. Inside, they analyze the patterns, realizing they're similar to what Doc Ock did to Peter when he stored his brain in an Octobot. The robots are activated by a REAL intelligence, that works as a hive-mind for all of them. As aunt May calls Peter, the droids activate and attack the two heroes, who organize their dinner with her in the process.

Xander Zynn arrives on the scene, asking what's going on. Spider-Man, willing to know that himself, opens up a droid, releasing and shattering the silicon matrix inside. As it crashes on the ground, it gives out a cry, like someone who's suffering: on the other hand, though, the robots seem to want that to happen. As Zynn screams that his dream would've revolutionized the world and eliminated a super-villain in the process, Peter thinks he's got it figured all out: smart silicon matrixes activate the robots; silicon is made of sand; therefore, the supervillain must be... not who he thought.

From the shattered matrixes Quicksand emerges, one of Thor's villains. She is going to attack Zynn for trapping her inside those robots, but Spidey manages to stop her asking her not to smash anyone as a thanks for freeing her. She agrees and vanishes in a sand tornado.

The Daily Bugle Science Insert of the week's headline is "The Fall of Humanitech" and it is more successful than the actual first page of the daily paper. Meanwhile, Zynn pays a private pilot to take him anywhere but there or a place with sand; Harry Lyman, now Head of Alchemax Acquisitions, and his ex-wife Liz buy the Humanitech compound.

As the couple comes home, Harry notices a band-aid on his son Stanley's arm, asking what happened to the babysitter. She answers that the two kids had a little rough-house, nothing to worry about; behind her back she holds blood samples, likely the true reason behind the boys' medication.

At the Bugle, Robertson compliments the team, urging Peter to start immediately to work on the next issue. Asked if he feels up for it, Peter answers: "I feel... like I'm home".

• The romance is blooming, but the Fall of Parker is at hand!

• Can down on his luck Peter Parker escape this latest conflict with his new relationship in one piece?