View source
Part of the 'Go Down Swinging' story arc 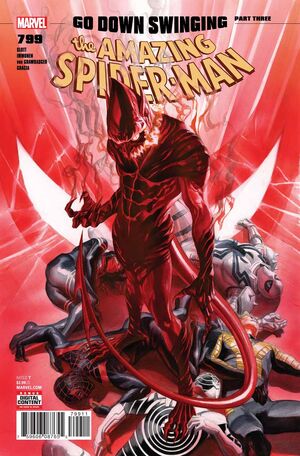 Another time, boy. Daddy's got some family bonding to take care of. Hee hee hee!

Appearing in "Go Down Swinging - Part 3: The Ties That Bind"Edit

Synopsis for "Go Down Swinging - Part 3: The Ties That Bind"Edit

Communicating with the Human Torch, Mary Jane Watson, Miles Morales, and Silk, Peter Parker has them keep an eye on his friends and loved ones - Johnny watching over MJ, Miles over Aunt May (himself surveyed by a trench coat-clad figure), and Silk over the Bugle employees. Silk asks Peter why he doesn't just gather everyone up or evacuate everyone out of the city, and Peter - hiding out at an old Oscorp facility - replies that would make them an even greater target. He tells Silk and the others that he's grateful to have friends like them, and the moment Osborn strikes they'll converge and work together to take him down. He warns them not to call him "Peter" since he's going to recruit some outside help who aren't in the know, calling Agent Anti-Venom. Agent Anti-Venom reveals he knows that Osborn is bonded to the Carnage symbiote and had Jameson tied up in one of his old hideouts, and Peter complements his work and asks him to keep an eye on Jameson... who quietly slips away while Flash is distracted. Peter then calls Clash, revealing he's been keeping tabs on him and knows he's not really a supervillain, asking him to step up and be a hero by looking after Harry Osborn and his family.

At Liz Allan's apartment, she, her brother, and Harry Osborn regain consciousness to discover that Emma has abducted Normie and Stanley. Liz tells a frantic Harry to calm down and calls Alchemax security, revealing she had their son chipped in case of a situation like this. Not noticing Norman Osborn is following them through the streets, the three of them follow Emma's trail, Harry and Liz bickering over her having the kids microchipped.

Jameson returns to his trashed apartment, remarking that at least he put up a fight against Osborn. Delighted to see his laptop is still working, he video-chat calls Peter. Peter tells Jameson that Osborn is back and knows who he is again, and Jameson shamefully admits that he slipped up when Osborn was interrogating him. Glaring at Jameson, Peter furiously hangs up and Jameson sorrowfully promises he'll make things right.

At the Port Authority of New York and New Jersey, Normie Osborn screams at Emma to return him to his mother. As Emma lectures him, Liz Allan furiously storms over to her and calls for security. Harry demands to know if she's working for his father, and Emma incredulously calls him stupid for thinking that and states she's trying to get the children as far away from Norman as possible, berating them for possibly leading him straight to them. As a man calls them out for bringing their family drama into the bus depot, Norman Osborn transforms into the Red Goblin and tosses him into the Alchemax security detail - terrifying his family. Emma reveals herself to be Emily Lyman-Osborn, stating that her ex-husband won't get her grandchildren; the Red Goblin calling Harry out on being more shocked that his mother is back from the dead than his father transforming into a nightmarish monster. Clash calls Peter and tells him that the Red Goblin has attacked Harry's family at the Port Authority, but protests he's way out of his league. Peter calls the other team members in, the Human Torch arriving seconds later and reassuring Clayton that symbiote's hate fire and sonics more than anything. The Human Torch and Clash attack, blasting the Red Goblin with a torrent of flames and sonic waves... which do absolutely nothing except make the Red Goblin angry. As an incredulous and horrified Peter tries to figure out what went wrong, Clayton turns to flee. Osborn reveals that the Goblin serum has rendered the Carnage symbiote immune to its traditional weaknesses, firing a barrage of spikes that incapacitate the Human Torch and Clash. Silk and Miles arrive on the scene, disregarding Peter's pleas to not engage. The Red Goblin effortlessly withstands Miles' Venom Blast and cuts both him and Silk down, telling Peter that he's going to kill them but as long as Peter himself doesn't suit up Mary Jane and Aunt May will be safe.

Before Osborn can finish Silk, Miles, the Human Torch, and Clash off, Agent Anti-Venom arrives, forcing the Red Goblin back with his anti-symbiote touch. When Flash reveals the Anti-Venom symbiote has healing properties superior to those of other symbiotes, the Red Goblin points out he could be using that to save the lives of Peter's other friends. Realizing the Red Goblin is right, Agent Anti-Venom disengages to heal Miles- and is promptly attacked from behind by the Red Goblin. Peter tells Flash to keep his head in the game and that he called 911, but Flash disregard's Peter's warning that he's playing right into Osborn's hands - saying he has the power and responsibility to save them. Suited up as Spider-Man and web-swinging across the city, Spider-Man hears Flash scream in pain as Osborn mauls him. Mocking Agent Anti-Venom for spreading himself too thin healing the others, the Red Goblin recognizes him as Flash Thompson and considers finishing him off in front of Harry... only to realize his family has used the distraction to escape. Berating himself for getting caught up in the battle, the Red Goblin departs to find them just before Spider-Man arrives. Cursing himself for arriving too late to save them and being unable to pull his weight with a mangled leg, Spider-Man notes that at least his friends are alive. Flash expends the last of his energy healing Spider-Man's leg.

Outside, Harry tells Liz and Mark to take Normie while he and Emma take Stanley, rebuking Normie for complaining that he favors his younger son. The Red Goblin interrupts and grabs Normie, knocking the others back with his tail. As Harry pleads with his father to take him instead, Norman sneers that Harry had his chance to join up with him and infects Normie with the Carnage symbiote, turning him into a miniature Red Goblin.

• SPIDER-MAN will need to the help of friend and foe alike if he hopes to stop THE GREEN GOBLIN this time!

• The mystery of the RED GOBLIN is finally revealed, and it’s not going to be pretty for Peter Parker!