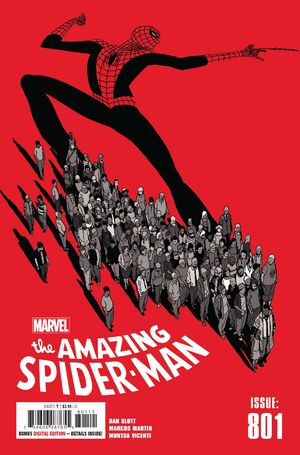 Yup. He saves a world every single day. Every person out there means the world to somebody. And Spidey's out there risking his neck for all of 'em. Their best friends. Their husbands. Their moms. Their girlfriends. Their uncles.

Appearing in "There For You"Edit

Synopsis for "There For You"Edit

Three weeks after Uncle Ben’s death, an office worker named Kenneth Kincaid, Jr. is working hard on a project when a coworker calls him to say that something is going on and he needs to come there immediately. Kincaid rushes out of the building to go across town, when he realizes he is out of cigarettes and heads into a nearby bodega to get some.

As he heads in, he discovers that a robber is holding up the bodega, and demands Kincaid hide behind the counter with the owner. Kincaid tries to explain he needs to leave, but the robber keeps pointing the gun at him. They are then interrupted by the timely arrival of Spider-Man, who smashes through the window and knocks Kincaid to the ground. Seeing Spider-Man but not knowing who he is, the robber threatens that he will shoot the bodega owner, only for Spider-Man to take him to safety as well with his webs. Spider-Man then tricks the robber into firing all of his bullets at him, which he dodges before breaking his gun.

Spider-Man eventually webs the robber up, at which point the bodega owner recognizes him as the celebrity from the news. As the owner asks if Spider-Man will eat the robber, the police arrive, prompting him to flee after leaving his trademark note. The police recognize Spider-Man, and begin apprehending the robber, but also force Kincaid to stay to give a witness testimony.

Hours later, Kincaid arrives at the hospital, where it is revealed the thing he needed to do was say goodbye to his dying father. He manages to make it in time, and says his goodbye before he passes. Later, he confides in his wife Ellie that he nearly missed his dad’s death for some cigarettes, but she tells him it’s okay because he made it regardless, and that as long as he’s there, everything is okay.

Over a decade passes. Kincaid’s son graduates high school, while Kincaid himself gets a niece, Judy, via his sister.

Eventually, in modern day Chinatown, Spider-Man is fighting the Inner Demons, who are trying to steal a suitcase of money. One of them manages to run away, but a man (at Spider-Man’s request) trips him, allowing Spider-Man to catch him. The man is revealed to be an older Kincaid, and he hands Spider-Man the money. Kincaid mentions to him that Spider-Man once saved his life, though he does not remember. When he asks what he did, Kincaid says that Spider-Man “got [him] to quit smoking”, though this leaves him even more confused.