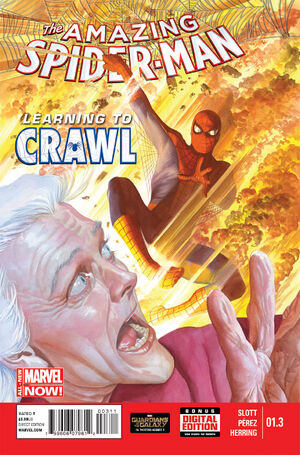 What do I do now? I've let you down, Uncle Ben. And now Aunt May too. Before, she was afraid I was a drug dealer. Now, if she knew the truth, she'd be even more upset. That's it. I'm through being Spider-Man! I'm done!

• His name's Clash and he's about to ruin Spider-Man's life. That's not exaggeration!

Retrieved from "https://heykidscomics.fandom.com/wiki/Amazing_Spider-Man_Vol_3_1.3?oldid=1407901"
Community content is available under CC-BY-SA unless otherwise noted.