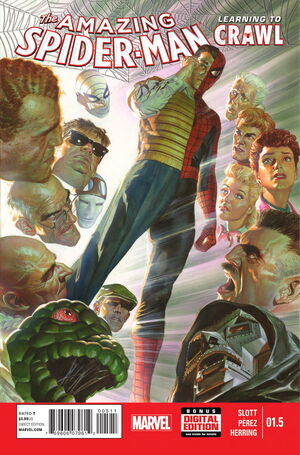 Hope you were watching, Uncle Ben. 'Cause I did that for you. Kept everyone safe. Kept them from being scared. And I made it fun. It doesn't matter that most of 'em wouldn't have lifted a finger for Peter Parker. That's not why you do it. You do it 'cause it's the right thing to do. Because it's what you would've done. You were more than a father to me, Ben Parker. More than a role model... You were my hero. Now it's my turn. Because from now on, I'm going to be yours! You'll see. I'm going to give it my all! We'll have fun! I'll never quit-- --and it's going to be Amazing!

THE CLIMACTIC CONCLUSION OF “LEARNING TO CRAWL!”

• We all know what Uncle Ben told Peter about power and responsibility, but there were some secrets he kept from Peter…

• Discover Clash’s fate that kept him secret all these years!

Retrieved from "https://heykidscomics.fandom.com/wiki/Amazing_Spider-Man_Vol_3_1.5?oldid=1407903"
Community content is available under CC-BY-SA unless otherwise noted.