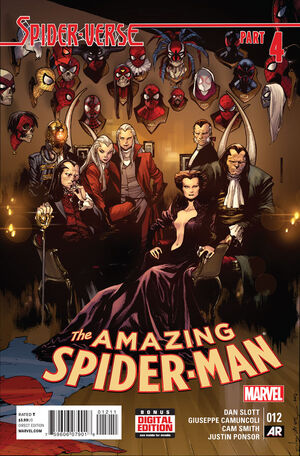 • THE FIRST HUGE BATTLE! Wait, if the first fights were just skirmishes, this can’t mean anything good for the Spiders.

• Miles Morales shows his stuff! Silk finds something valuable on her run!

• Meet the most surprising Spider-Character yet!

Retrieved from "https://heykidscomics.fandom.com/wiki/Amazing_Spider-Man_Vol_3_12?oldid=1638014"
Community content is available under CC-BY-SA unless otherwise noted.