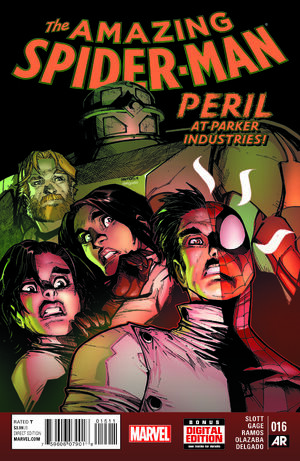 Appearing in "The Graveyard Shift Part One: The Late, Late Mr. Parker"Edit

• Spider-Verse is over, but that doesn’t mean Peter Parker is safe.

• Someone (or something) has invaded Parker Industries and is targeting its staff!

• But how? Parker Industries’ security can keep out any living thing?!

In the Slide-Away Casino, Melter and Killer Shrike take Ringer to the back room. Black Cat shows him various items and tells him that even she can't steal everything and sometimes must pay for them, and asks him how is she supposed to do that when nobodies like him don't pay her weekly cut.

Ringer tells her he didn't pay because he was captured by Silk, owed the Spot for getting him out of jail, and had to pay the Tinkerer for new equipment. He reminds Felicia that they worked some jobs together and remembers her having a heart, appealing to the old Felicia for compassion. She hesitates long enough for the Ringer to attack them, hitting Felicia in her arm before she takes him down.

She tells him he will make three times the cut and will also serve as an example, having Killer Shrike and Melter beat him up. Felicia is surprised Ringer could tag her as she normally is more lucky. She wonder if it was luck to remind her of who she is now and tests her luck with one of the casino's machines and wins.

She notices that lately the harder she listens to the part of her that tells her not to let anyone put her down, the more her luck gets off the charts. She remembers her life in the elite class before she lost it all. The Melter and Killer Shriek bring in Ringer and Felicia tells him to spread the word that no one steals from her.

Meanwhile in the auction, Jay and May retire as a lady is determined to buy all of the items. The items in the auction are the possessions of the Black Cat, who plans to steal her life back.

Retrieved from "https://heykidscomics.fandom.com/wiki/Amazing_Spider-Man_Vol_3_16?oldid=1639366"
Community content is available under CC-BY-SA unless otherwise noted.