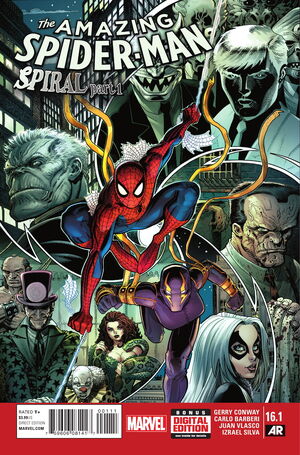 • The underworld is in a constant flux and has been since the Kingpin got taken out at SHADOWLAND. That war is heating up and Spidey’s going to do something about it.

• But he’s not the only one-- Police Captain Yuriko Watanabe is trying to curtail the madness both in her day job as a police office and as the vigilante THE WRAITH!

• Do she and Spidey play by the same rules?

Retrieved from "https://heykidscomics.fandom.com/wiki/Amazing_Spider-Man_Vol_3_16.1?oldid=1639345"
Community content is available under CC-BY-SA unless otherwise noted.