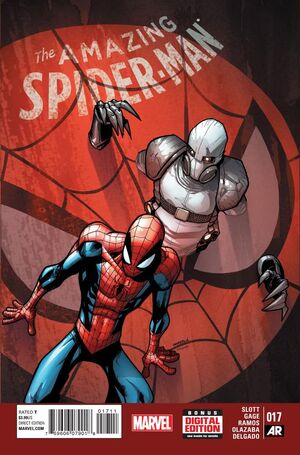 • The Ghost has invaded Parker Industries!

• With this super-powered saboteur, no secret is safe-- no PEOPLE are safe, either, for that matter.

Appearing in "Repossession Part 2 of 3: No Take Backsies"Edit

Synopsis for "Repossession Part 2 of 3: No Take Backsies"Edit

Two years ago, Felicia Hardy presents a painting in an elite party. In the present day at a museum, Regina Venderkamp, the woman who bought all the items confiscated from the Black Cat in an auction, presents the same painting that Felicia did.

However, the lights go out for a moment and the painting is gone. An enraged Regina and her bodyguards go to her apartment only to find all of her treasures gone. She goes upstairs to see if she also took everything there, despite a bodyguard protesting since the Black Cat could still be there.

Felicia then appears and says she couldn't leave without Regina learning that no one takes from the Black Cat without paying. Regina orders her bodyguards to attack, but Felicia quickly takes the out. She reflects that her bad luck powers seem to work better when she is ruthless and she may have been holding back before. She throws one of her claws to Regina's neck, causing her to pass out.

Hour later, Regina wakes up handcuffed to a chair at the Black Cat's hideout. Felicia contemplates almost all of the items that were confiscated and those she retrieved, with only one missing. In Jay's and May's apartment, they contemplate the last item, the only thing they got at the auction, and go watch TV unaware that the Black Cat plans to steal it back.

Retrieved from "https://heykidscomics.fandom.com/wiki/Amazing_Spider-Man_Vol_3_17?oldid=1639367"
Community content is available under CC-BY-SA unless otherwise noted.