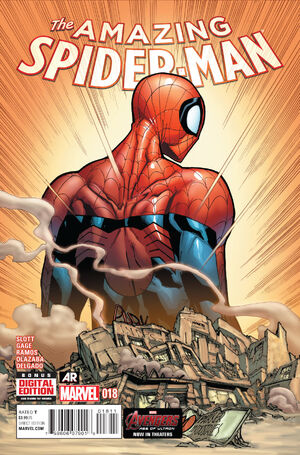 • A huge chapter in AMAZING SPIDER-MAN history comes to a close!

Appearing in "Repossession, Part 3 of 3: Nothing Left To Lose"Edit

Synopsis for "Repossession, Part 3 of 3: Nothing Left To Lose"Edit

Wanting to tell them what happened at Parker Industries personally, Peter goes to May and Jay's home. After knocking without answer, Peter enters with his spare key to find their apartment trashed, seeing signs of struggle, he realizes someone took them. He wonders if it could have been the Ghost, but realizes it had to be personal since nothing valuable was stolen.

However, he realizes that the statue they bought in the auction is missing and remembers when he saw it before. Meanwhile, the Black Cat places the statue with the rest of her things while having May, Jay and Regina tied up. Jay asks her why did she took them as she doesn't need money and they didn't do nothing to her. Felicia pours gasoline around her apartment and tells Jay he is wrong as they bought her things in the auction, a collection she spent years acquiring. She tells him that's the problem with possessions, they can break, you can lose them or they can be taken. And when that happens, everyone thinks they can take what's yours unless you prove them wrong. She says that nothing and no one will have that hold on him before setting the apartment on fire.

Meanwhile, Spider-Man web-slings to Felicia's old apartment, where he remembers seeing the statue before. He enters the burning apartment and unties May, Jay, and Regina. May warns him that the Black Cat is still in there and Peter asks Felicia for help. She tells him to save them if he wants as she made her point and the more people know the better. Parker tries to convince her that this isn't her but she tells him that that Felicia he knew is gone and she is done being who others want.

She tells her that she controls her fate and anyone who stands before that will also be gone. Spidey manages to save May, Jay and Regina, who screams at him for not saving her things before May shushes her, telling her that people are what count, not things and Spider-Man knows that. May tells him that the news showed him doing horrible things lately, and he tries to explain that he was possessed by Otto but May tells him that after he saved her, Jay, and Peter so many times she should have had more faith in him. She assures him that it's fine with her if he gets his tech from Parker Industries, still not knowing what happened.

Retrieved from "https://heykidscomics.fandom.com/wiki/Amazing_Spider-Man_Vol_3_18?oldid=1639368"
Community content is available under CC-BY-SA unless otherwise noted.