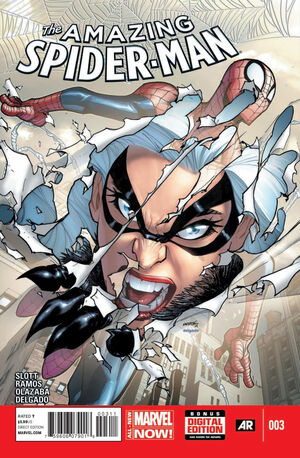 • Because of her last encounter with Spider-Man, Felicia Hardy lost everything. Now the Black Cat is back, and she doesn’t want any apologies or excuses... just REVENGE.

• Plus: Spidey teams up with a real hero, fireman Pedro Olivera... who just happens to be the current boyfriend to one Mary Jane Watson.

• And... more on you-know-who from the opening scene back in ASM #1. You know who we’re talking about. Yeah, that’s right. You better not miss this one!

Retrieved from "https://heykidscomics.fandom.com/wiki/Amazing_Spider-Man_Vol_3_3?oldid=1637967"
Community content is available under CC-BY-SA unless otherwise noted.