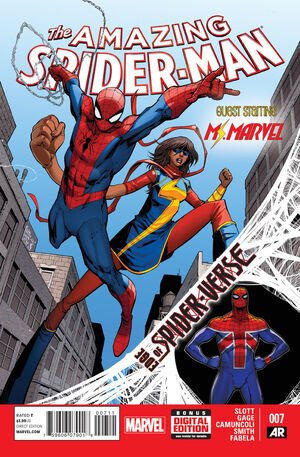 • Peer over the EDGE OF SPIDER-VERSE!

• Spidey teams up with Ms. Marvel in a high-flying (stepping in Kamala’s case) adventure!

• Who is Spider-UK and what does he have to do with SPIDER-VERSE?

Appearing in "Edge of Spider-Verse: Web of Fear"Edit

Synopsis for "Edge of Spider-Verse: Web of Fear"Edit

At the Omniverse, Billy Braddock, one of the newest recruits into the Captain Britan Corps, scans other universes since he's sensing something wrong. He first witnesses the Earth-1983 where Morlun slays an alternate Spider-Man and his teammates Iceman and Firestar. Later he sees Brix and Bora on Earth-999 where Bora slays a cat with Spider-Man's powers and then sees on Earth-7831 how Daimos not only slayed that world's Spider-Man but is also feeding from the animalistic residents, but Daemos' brother Jennix arrives. He tells him that their father send him to tell him to return home since he devoured that world's Spider-Totem long ago. However, he insist on staying since the world is rich with animal totems. Jennix reminds him that their father ordered to only hunt spiders, however, thanks to one of Jennix devices, they both detect Billy watching them, to which he promptly cuts the scanner feed.

As Saturnyne and Lady Roma express their concerns about the Incursions that are destroying many dimensions a corpsman brings a wounded Captain Lionheart, who escaped an Incursion involving three realities. Billy arrives to express his concern about all the spiders across the multiverse being hunted and killed. Saturnyne rebuffs him rude and coldly, considering it insignificant now that they deal with Incursions, but Roma sympathizes with him and gives him a talisman that allows him to travel through the web of life in order to save all the remaining spiders on the off-chance that the Inheritors' Great Hunt is connected to the Incursions.

In the story named "Edge of Spider-Verse: Web of Fear", Morlun stated that Earth-1983 is kinder and gentler than most universes. This is an obvious reference to cartoon's kids-friendly production.

Retrieved from "https://heykidscomics.fandom.com/wiki/Amazing_Spider-Man_Vol_3_7?oldid=1638000"
Community content is available under CC-BY-SA unless otherwise noted.