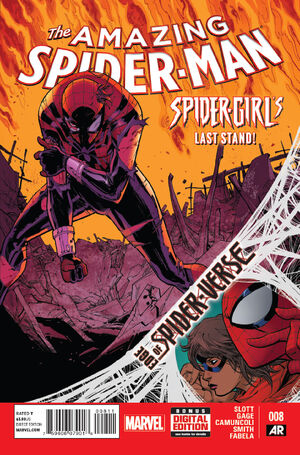 Appearing in "Ms. Adventures in Babysitting"Edit

• Step over the EDGE OF SPIDER-VERSE!

• MC2 Spider-Girl finds herself and her family under attack from the mysterious forces behind Spider-Verse!

• Ms. Marvel gets Spider-Man out of a jam.

Appearing in "Edge of Spider-Verse: My Brother's Keeper"Edit

Synopsis for "Edge of Spider-Verse: My Brother's Keeper"Edit

On Earth-982, Daemos assaults that world's Spider-Totem, May Parker, Peter's daughter and the hero known as Spider-Girl. Her boyfriend Wes tries to stop him but he's easily taken down. May sees in horror how Peter sacrifices himself with a damaged leg in order to save her and her baby brother Benjy. MJ buys May time so she can escape with Benjy but as she leaves, she bumps into a portal bringing Spider-UK and Last Stand Spider-Man. She asks for their help to save her family but Last Stand Spider-Man says that they only found two Spider-Totems: her and her brother, meaning that Peter was killed by Daemos who taunts her about her looming fate while Mayday replies that she swears to kill him, even if that means she has to break all the values and vows her father taught her. As she departs, Daemos challenges her for the next time they meet.

Retrieved from "https://heykidscomics.fandom.com/wiki/Amazing_Spider-Man_Vol_3_8?oldid=1638001"
Community content is available under CC-BY-SA unless otherwise noted.