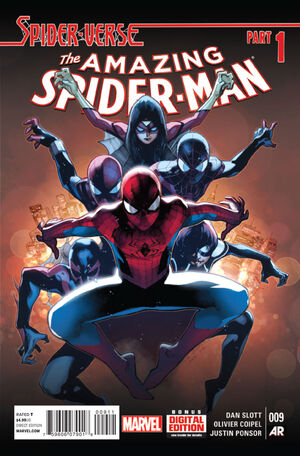 Appearing in "Spider-Verse Part One: The Gathering"Edit

• When a force of evil threatens spider-characters throughout the multiverse, EVERY SPIDER-MAN EVER is needed to save the day!

Appearing in "Spider-Verse: The Feast"Edit

Synopsis for "Spider-Verse: The Feast"Edit

On Earth-001, Verna's servant Ms. Drew, is receiving barreos of wine from Mr. Robertson, Bannon, and Katzenburg. Robertson asks her if the rumors of the Inheritors' temperament are true, which she assures they are. Robertson says to consider the wine a gift and tells her he imports fine foods, but she tells him that they will bring their food. At a massive dinner-table laden with crippled Spider-Totems, Brix, Bora, Jennix, and Daemos wait for Morlun and Verna to return from a hunt, complaining that they are taking too long. Solus, the patriarch of the Inheritors, interrupts, stating that they will wait for Morlun. As his children complain further, Morlun returns carrying the Spider-Man from Earth-9105. Solus inquires what tributes his other children have brought for the feast, and Brix and Bora mention they ran into Karn fighting a group of Spiders from multiple worlds. Daemos sneers at Jennix's concern that the Spiders are banding together, mentioning that he battled a group of them while hunting the Other's receptacle on Earth-616. Morlun, outraged, attacks Daemos and the two nearly come to blows, with Daemos taunting him of his deaths by Spider-Man, before Solus intimidates them. Solus reminds them that he has known all along where the Bride, the Other, and the Scion are located and how every important trend in the web unravels, which he forces the Master Weaver to confirm, and that the web is theirs. He asks his children to tell him what the Web of Life and Destiny means to them. Brix and Bora respond that they view the Great Web as an eternal game, a competition to see who can kill the most Totems. Jennix responds that he views the Web as a puzzle to be solved, as the Weaver told him that he would never unravel its secrets. Daemos responds that he views the Web as a licence for debauchery, as the Weaver informed him that he would perish before his father and that he wanted to enjoy what life he has left to the fullest. Morlun responds that, as Solus' chosen heir, the Great Web is his legacy and obligation. Solus corrects them, stating that the Web is all things and everywhere, and that it is their kingdom, making them the Inheritors of All Creation. The Spider-Man from Earth-9105 interrupts, calling the Inheritors thieves and vowing that the Spiders will overthrow them. Morlun angrily snaps that all the Spiders are to the Inheritors is food, and Solus commands his children to feast.

Retrieved from "https://heykidscomics.fandom.com/wiki/Amazing_Spider-Man_Vol_3_9?oldid=1638011"
Community content is available under CC-BY-SA unless otherwise noted.