Start a Wiki
Part of the 'Lifetime Achievement' story arc 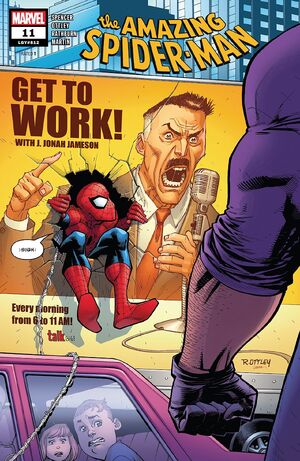 It's about time someone points out how much good I've done for this city.

• J. JONAH JAMESON has a new job as a shock jock, but is the world ready for a pro-Spider-Man JJJ?

• More importantly, is Spider-Man ready? His post-secret-identity relationship with Jonah was already complicated, but this very public embrace may put him over the edge!

• Spidey’s definitely not ready for the Enforcers to come at him harder than ever!

Retrieved from "https://heykidscomics.fandom.com/wiki/Amazing_Spider-Man_Vol_5_11?oldid=1655486"
Community content is available under CC-BY-SA unless otherwise noted.