Start a Wiki
Part of the 'Hunted' story arc 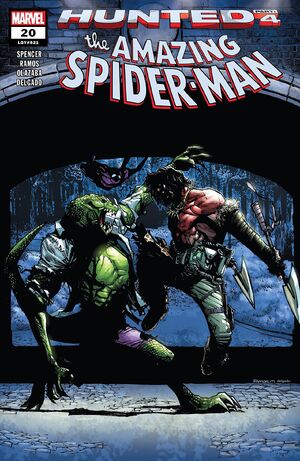 I used to be a good guy too, you know. Or at least I tried to be. Guess I was never really cut out for it. Even when I was an Avenger, I felt like an impostor. Maybe that's why me and Tasky hit it off so well in the first place. Finally I'd met somebody lower than me. 'cause no matter what I did -- it was like was always this thing inside me pulling me back, out of the light.

• The big showdown begins. Spider-Man vs. Kraven. Place your bets, ladies and gentlemen.

• If this is like past Kraven stories, you know it’s not going to go how you THINK it’s going to go.

Retrieved from "https://heykidscomics.fandom.com/wiki/Amazing_Spider-Man_Vol_5_20?oldid=1655502"
Community content is available under CC-BY-SA unless otherwise noted.