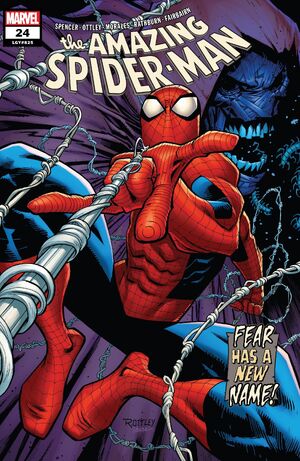 All leading up to Nick Spencer’s Landmark 25th issue!

• One issue away from #25 and the chickens are coming home to roost.

• Who is the mysterious bandaged figure who seems to be in every shadow and what does he want with Spider-Man?

• This issue won’t answer ALL your questions, but it will answer some that will drop your jaw.

Appearing in "Everyone Is a Target: Part 4"Edit

Synopsis for "Everyone Is a Target: Part 4"Edit

Spider-Man sits on a roof, eating pizza and watching in fascination as a flock of pigeons soar in a strange spiral formation. As he munches a slice and decides to go back to work when he's finished, he notices a pigeon land nearby and stare ominously at him. Peter offers the bird his crust, and it nearly takes his hand off snatching it away. As Spider-Man yells at the bird, it transforms into a red-and-black monster and devours the crust -- leaving him horrified and speechless.

Retrieved from "https://heykidscomics.fandom.com/wiki/Amazing_Spider-Man_Vol_5_24?oldid=1669997"
Community content is available under CC-BY-SA unless otherwise noted.