Part of the 'Who Run the World?' story arc 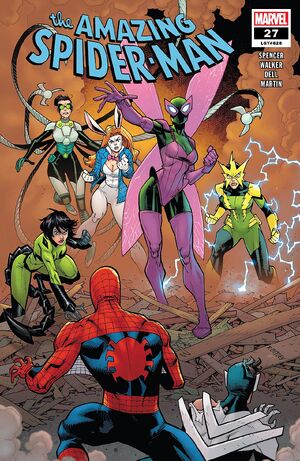 You colossal idiot -- are you seriously trying to mansplain heists to us right now? The F.E.A.S.T. center's not the target -- you are.

Appearing in "Who Run the World? Part Two"Edit

• There is a new Sinister Syndicate!

• Beetle, Electro, Lady Octopus, Scorpia and White Rabbit have come together for one reason: TO HUNT BOOMERANG!

• Spidey knew having Boomerang as a roommate would come back to bite him, but not like this.

Retrieved from "https://heykidscomics.fandom.com/wiki/Amazing_Spider-Man_Vol_5_27?oldid=1670000"
Community content is available under CC-BY-SA unless otherwise noted.