Part of the 'The Future Is In Peril' story arc 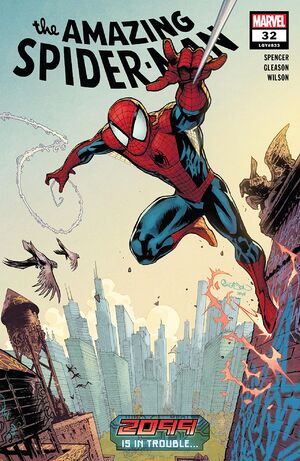 What has yesterday done to tomorrow?

THE FUTURE IS IN PERIL!

• As seen in ASM #25, Miguel O’Hara is back in the present and NEEDS to get to Peter Parker.

• But as he’s currently being held in an off-the-books ROXXON prison, this is easier said than done.

• And J. JONAH JAMESON has a new scheme which means one thing-- TROUBLE FOR SPIDER-MAN!

Retrieved from "https://heykidscomics.fandom.com/wiki/Amazing_Spider-Man_Vol_5_32?oldid=1675974"
Community content is available under CC-BY-SA unless otherwise noted.