Start a Wiki
Part of the 'Back to Basics' story arc 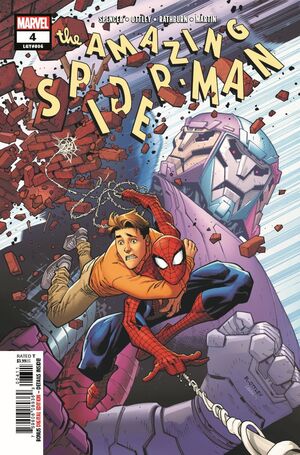 Appearing in "Back to Basics: Part Four"Edit

PETER PARKER & SPIDER-MAN IN THE SAME PLACE AT THE SAME TIME?!

• Things are crazy for Spider-Man. His personal life in turmoil, the giant TRI-SENTINEL returning to attack NYC…

• …and someone is out there impersonating Peter Parker!

• Is it the Chameleon? An LMD? Ultimate Peter Parker making his Marvel U debut? Think again, True Believer!

Retrieved from "https://heykidscomics.fandom.com/wiki/Amazing_Spider-Man_Vol_5_4?oldid=1632099"
Community content is available under CC-BY-SA unless otherwise noted.