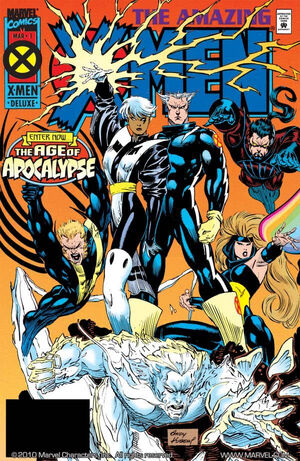 Alison, a wise man once said "It ain't over until it's over." We fight until this war against Apocalypse is won -- or to our last breath.

Appearing in "The Crossing Guards"Edit

Synopsis for "The Crossing Guards"Edit

In Booth Bay Harbor, Maine, Copycat learns that the humans are trying to make a trek to Eurasia and reports this to the Brotherhood of Chaos. Bishop is at the X-Mansion and he watches as the X-Men battle a holographic Sentinel courtesy of Dazzler. The team defeats the Sentinel and then joins up to help the humans in Booth Bay Harbor. Exodus teleports them all there.

They are waiting for Sentinels to arrive from Eurasia so they can have them safely guard the human transport. They are going to infect the Sentinels with a virus that will mask them to their mutant presence. The plan seems to go as planned until one Sentinel suddenly attacks and as the X-Men try to find out what has happened, their answer comes in the name of the Brotherhood of Chaos who appears to have been onto the plan from the beginning.

Retrieved from "https://heykidscomics.fandom.com/wiki/Amazing_X-Men_Vol_1_1?oldid=1684004"
Community content is available under CC-BY-SA unless otherwise noted.