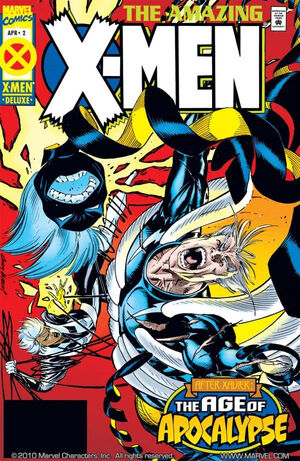 Abyss toys with the kid he just kidnapped and brought to his ship. Outside, the X-Men are dealing with the Brotherhood of Chaos, their saboteurs of the plan to take over the Sentinels. They are being led by a Cardinal Madri and he tells Copycat and Yeti to blend into the crowd of humans. Quicksilver goes after them and grabs one of them, it appears to be the Scarlet Witch, who was thought to be dead. This turns out to be Copycat and the battle resumes. Banshee meanwhile, has stumbled onto Abyss' ship and finds that he has enveloped the kidnapped kid in his coils and tells Banshee to return with Quicksilver.

The X-Men have defeated the Brotherhood for the time being and Banshee finds Quicksilver and has him go to Abyss. Quicksilver fights with Abyss and Storm shows up and helps rescue the child and Quicksilver puts Abyss' head into his own void and it sucks him into himself and he is gone. Outside, the X-Men have gotten the Sentinels back on track and it is transporting the humans over to Eurasia.

Elsewhere, in Apocalypse's citadel Rex interrogates Karma who Sebastian Shaw had seen talking to Gambit and Angel about where the X-Men's hideout was. They threaten her with the Shadow King and she appears to give in to them. Apocalypse himself oversees this and plans to get Magneto at the X-Mansion.

Retrieved from "https://heykidscomics.fandom.com/wiki/Amazing_X-Men_Vol_1_2?oldid=1684842"
Community content is available under CC-BY-SA unless otherwise noted.