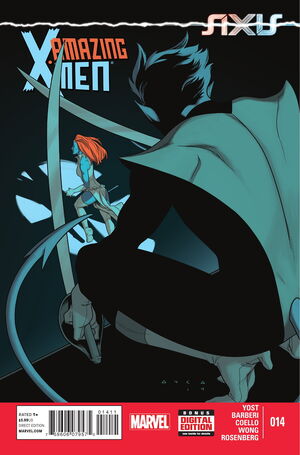 Kurt's gone. But I did it. No one died. No blood on his hands. I'll find him wherever he is. I'm not giving up. I'm not letting go. Because my son would never give up on me.

Appearing in "The Worst of Us"Edit

• As the events of AXIS reach a boiling point, both X-Men and Avengers find themselves in precarious positions. Not the least of which are Nightcrawler and Mystique—as this tumultuous mother/son combo reaches and a point in their relationship they’ve never faced before!

Retrieved from "https://heykidscomics.fandom.com/wiki/Amazing_X-Men_Vol_2_14?oldid=1504419"
Community content is available under CC-BY-SA unless otherwise noted.