Part of the 'The Once and Future Juggernaut' story arc 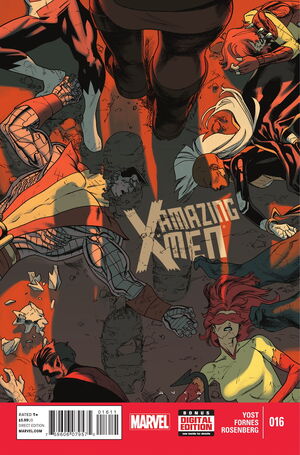 Appearing in "The Once and Future Juggernaut: Part Two of Four"Edit

THE ONCE AND FUTURE JUGGERNAUT 2 of 4

• Attempting to create a new Juggernaut, the Gem of Cyttorak is calling out.

• And none hears the call more than those who have previously housed the power of Cyttorak, Cain Marko and Colossus.

• But they aren’t the only ones out to find the Gem. Can the X-Men uncover its location before it’s too late? And can Colossus resist the temptation of the power of Cyttorak?

Retrieved from "https://heykidscomics.fandom.com/wiki/Amazing_X-Men_Vol_2_16?oldid=1641995"
Community content is available under CC-BY-SA unless otherwise noted.