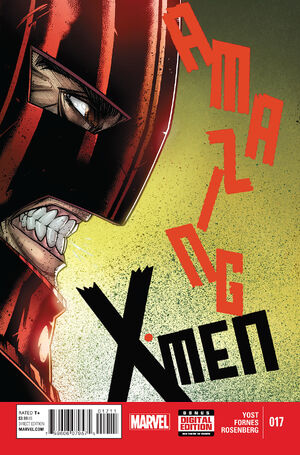 Appearing in "The Once and Future Juggernaut: Part Three of Four"Edit

THE ONCE AND FUTURE JUGGERNAUT 3 of 4

• Sure, the Juggernaut is bad. But what’s the worst case scenario of possessing that power? You’re about to see.

• “Unstoppable” takes on a whole new meaning as someone finally gets their hands on Cyttorak’s gem.

• The X-Men have fallen. The Juggernaut rises. Bring a change of underwear.

Retrieved from "https://heykidscomics.fandom.com/wiki/Amazing_X-Men_Vol_2_17?oldid=1641996"
Community content is available under CC-BY-SA unless otherwise noted.