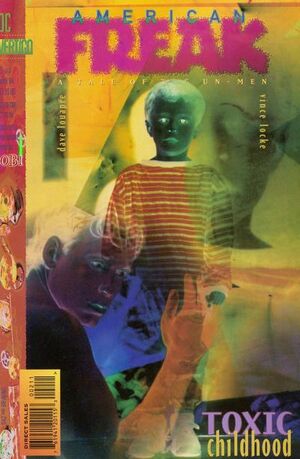 I'd never witnessed a sunrise in a cemetery before. It filled me with a kind of depressed optimism.

Appearing in "The Covenant of Freaks"Edit

Synopsis for "The Covenant of Freaks"Edit

Damien follows the beckoning voice deep into the woods. The trail leads him to a decrepit cemetery and an Un-Men named Crassus. Crassus gives Damien shelter inside of an empty crypt.

At Lafayette Air Base, Major Lawrence coordinates a strategy to find the missing Damien Kane. He addresses a room full of soldiers as well as the staff scientists. Lawrence tells Doctor Manguy that he is confined to the base until further notice.

As the evening grows, Crassus introduces himself to Damien. He tells him that he is one of Anton Arcane's original Un-Men and that he was born in Romania many years ago. Crassus knows what is happening to Damien and tells him that it is only a matter of time before his body begins to transform into that of an Un-Man. Crassus tells him that the only hope of restoring his humanity lies with Anton Arcane, but to find him, they must travel to the scientist's castle in Romania. The change begins to overtake Damien and his body is wracked with cramps. Crassus provides comfort and tells him to trust him.

At Lafayette, Doctor Manguy drowns his sorrows with a bottle of whiskey. Doctor Hutcheson tries to alleviate Manguy's guilt, but to no avail. He promises him that the soldiers will find Damien and bring him back safely.

The following day, Crassus and Damien take a small pirogue out to sea and stow away on a freighter bound for Europe. Crassus says that together they will find the other "Children of Arcane" and all will be better.

In Romania, a wealthy man named Alexiev Gogol hosts a lavish party. The ballroom of his castle is a living museum of freaks - Un-Men forced to prostrate themselves for the amusement of Gogol's eccentric guests. One of the humiliated attractions, a dwarf named Scylla, has a precognitive vision and whispers that someone is coming for them.

Retrieved from "https://heykidscomics.fandom.com/wiki/American_Freak_Vol_1_2?oldid=1409207"
Community content is available under CC-BY-SA unless otherwise noted.