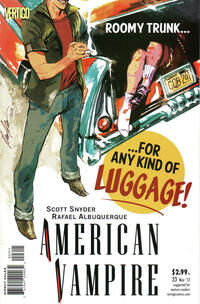 It's 1955 and AMERICAN VAMPIRE is terrorizing the suburbs with hot rods, teenyboppers and fangs! Learn more about the ferocious new vampire hunter Travis Kidd and his connection to Skinner Sweet. Plus: Who is that mysterious man Travis is racing? Find out in "Death Race" part 2!

Retrieved from "https://heykidscomics.fandom.com/wiki/American_Vampire_Vol_1_23?oldid=1409235"
Community content is available under CC-BY-SA unless otherwise noted.