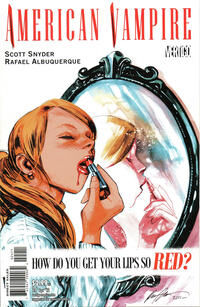 A drag race to the death comes to a fiery end, a sworn enemy's identity is finally revealed, and lots of blood is spilled. It's 1955 in America and teenagers have gone wild and bloodthirsty in "Death Race" part 3!

Retrieved from "https://heykidscomics.fandom.com/wiki/American_Vampire_Vol_1_24?oldid=1409236"
Community content is available under CC-BY-SA unless otherwise noted.