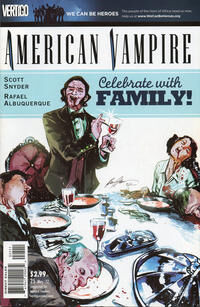 This is it! "The Death Race" comes to a stunning conclusion as we learn the truth about the origin of vampire hunter Travis Kidd. Plus: Some old friends return and a shocking ending that's not to be missed!

Retrieved from "https://heykidscomics.fandom.com/wiki/American_Vampire_Vol_1_25?oldid=1409237"
Community content is available under CC-BY-SA unless otherwise noted.