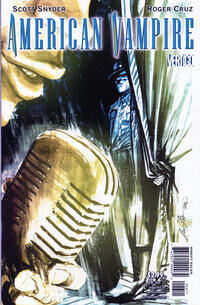 Appearing in "The Nocturnes, Part One of Two"Edit

Synopsis for "The Nocturnes, Part One of Two"Edit

Calvin Poole survived the "Ghost War" in the Pacific, but he returns to America with a secret: He's now an American vampire like Skinner and Pearl! And when he travels to a small town in Alabama to see his brother, he learns he's not the only one with a secret. The 2-part tale"The Nocturnes," starts with incredible guest-artist Roger Cruz!

Retrieved from "https://heykidscomics.fandom.com/wiki/American_Vampire_Vol_1_26?oldid=1409238"
Community content is available under CC-BY-SA unless otherwise noted.