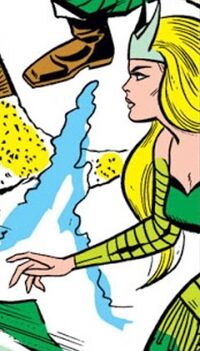 On Earth-689 the Enchantress was defeated and imprisoned by the Avengers. The Avengers had been tricked by the Scarlet Centurion to imprison all of the super heroes and villains. The Centurion offered them knowledge of the future so that the group might conquer famine, plague, and pestilence and bring on a golden era of peace. Enchantress was presumably released when the Avengers were defeated by their Earth-616 counterparts.[1]

Seemingly those of Amora (Earth-616)#Powers.

Retrieved from "https://heykidscomics.fandom.com/wiki/Amora_(Earth-689)?oldid=1657359"
Community content is available under CC-BY-SA unless otherwise noted.