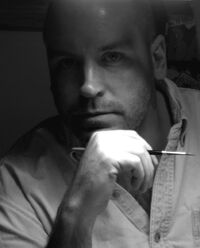 Ande Parks is a professional American comic book artist, known for his work as an inker and writer in the industry. His greatest notoriety has come from his stint with fellow artist Phil Hester on DC Comics Green Arrow series from 2001-2004 and writing the graphic novels Union Station and Capote in Kansas by Oni Press. He grew up in the suburbs of Kansas City and currently lives in Baldwin, Kansas with his wife and two children.

Parks began his professional career as an inker in comic books with Dark Horse Comics. He has inked the penciled artwork of such titles as Wonder Woman, Catwoman, Superman, Daredevil, and Spider-Man. His artistic style has won him praise in the comic books industry, including an industry Harvey nomination as best inker. His idols and influences include Neal Adams, Klaus Janson, Jack Kirby, Dick Giordano, and Mike Grell. For characters from the comic books, Parks has acknowledged he has most enjoyed Batman and Captain America as his favorite characters.

He is probably best known for his work on the relaunched Green Arrow comic book series beginning in 2001, which he inked over his frequent collaborator Phil Hester. On Green Arrow, Hester and Parks worked with writers Kevin Smith, Brad Meltzer, and Judd Winick over their approximate 40-issue run. The book has been collected into several volumes. The American Library Association called it one of the best books for young adults. Parks and Hester have also done work on DC Comics’ Nightwing with writer Devin Grayson, allowing Parks to work within the Batman family of characters, and the new revamped Ant-Man comic book for Marvel Comics in 2006-2007.

Although better known for his artwork, Parks considers himself to be more of a writer than artist. He has contributed several articles in comic book trade magazines, such as Draw!, geared towards critiques of artwork and professional tips for inkers. Parks' combined his inking style with his fondness for writing when he created the superhero spoof Uncle Slam & Fire Dog for Action Planet Comics, based to a certain extent on his love of Marvel Comics' Captain America. Uncle Slam appeared in three issues of the Action Planet anthology book series, and in two issues of his own book in the early- to mid-1990's. The character also appeared in a completely on-line comic book for Komicwerks.

For graphic novels, he has often turned to his neighboring region in the Midwest as source material for his writing projects. To date Parks has steered towards writing that is best classified as historical fiction. He has credited Alan Moore's From Hell as being a large influence in his decision to pursue writing in the historical fiction genre. In 2004, Oni Press published Park's first original graphic novel, Union Station. The book dealt with the events surrounding the Kansas City Massacre, which took place in 1933 in Kansas City, Missouri, and helped J. Edgar Hoover make the F.B.I. a powerful organization in law enforcement and government for decades to come. Eduardo Barreto provided the artwork, done in black-&-white to give the piece more of a Depression-era period look.

In 2005 Parks returned to the genre of historical fiction with Capote In Kansas, drawn by Chris Samnee. The book details the time Truman Capote spent in Kansas while he worked on his literary masterpiece, In Cold Blood. He is currently developing his next writing project, geared towards a science fiction story set on Mars.

Retrieved from "https://heykidscomics.fandom.com/wiki/Ande_Parks?oldid=157907"
Community content is available under CC-BY-SA unless otherwise noted.