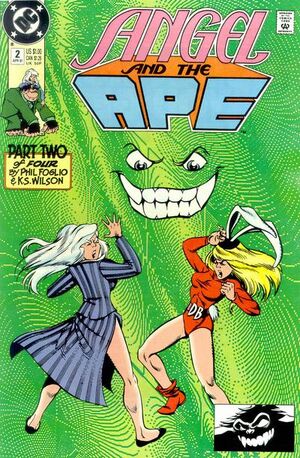 Appearing in "The Apes of Wrath!"Edit

Synopsis for "The Apes of Wrath!"Edit

Angel shoves Tim out the door while Athena ties up the gorillas. They speculate that these apes come from the same place Sam does...only they don't remember where that is. Angel wakes one of the gorillas up (Lamoola) and interrogates him. Lamoola is shocked to learn that the humans know about the human/gorilla transformation and begins to suspect that he and his colleagues have been manipulated. They had been led to believe that Sam Simeon was responsible for the transformations (there have been 5 so far) which seem to last for varying timelengths (the longest three hours) but once they pass, only one second of actual time has passed. A man (a disguised Grodd) appears impressed that Lamoola has figured out he's been manipulated but is grateful for leading him here. Grodd uses his mind powers on Angel and Athena to force them to relive the day's events at a much accelerated pace (which Angel notices) culminating in Athena angrily demanding to know where Sam is which Angel refuses to divulge. They both escape the mind trap to discover the disguised gorillas are gone. Angel realizes she needs help and instructs Athena to call the Justice League and bring them over to Sam's apartment where Angel heads off to hoping to find a clue to Sam's whereabouts. Athena calls the JLI but gets Guy Gardner who is condescending and angers Athena to the point that she hangs up before getting their help. Realizing that Angel wants superheroes, Athena calls her own team. Meanwhile Angel gets to Sam's apartment to find Sam struggling with three disguised gorillas. She intervenes and the pair are able to capture the gorillas as Athena, now dressed as Dumb Bunny, arrives. Angel and Athena argue over the Inferior Five being brought in instead of the JLI. Sam breaks up the fight ordering Angel to tie up the gorillas while he comforts Athena. Sam explains Angel's hostility by asking Athena to see Angel's life from Angel's point of view:

Theo O'Day married Princess Power and had Athena but Theo was unable to cope with a family with superpowers. He left them, to his constant shame, and married a normal woman with whom he had Angel. Angel's mother died when she was still an infant and Princess Power returned, inviting them to live with her. Theo and Princess Power remarried and managed to make the marriage last, likely due to his frequent absences for work. But Angel grew up in a home where everyone had super-strength except for her and for a long time thought that something was wrong with her. Once she discovered the truth, she still felt weak and overcompensated by pushing herself to the limits, learning fencing, martial arts and marksmanship among other skills. Sam believes Angel is still competing with Athena subconsciously.

Sam and Athena turn to the subject of her and Angel's lunch and Athena reveals that she's in love with a part-time hero, part-time artist. Sam leaps to the conclusion that she's in love with Myron Victor (a.k.a. Merriman) which Athena takes hard. Angel confronts Sam during which Sam realizes Athena meant him. Sam demands to know why Angel didn't talk her out of it and Angel reveals that she thinks it's a good idea as Sam would take good care of Athena. Angel asks Sam to explain why these gorillas are chasing him and Sam reveals (as he has done repeatedly) that he's from Gorilla City and that the gorillas have a mental beacon in the arctic which causes humans to forget all about Gorilla City...which causes Angel to immediately forget the entire conversation. Outside, Grodd (in disguise) confronts a saddened Dumb Bunny who reveals a second group of Gorillas has come and that she is ready to rough him up over his earlier actions. Instead Grodd uses his mind powers to cause Dumb Bunny to hallucinate that she is hurting/killing her loved ones due to her strength. Angel and Sam come and calm her down with Angel angrily confronting Grodd who reveals his true form.

Retrieved from "https://heykidscomics.fandom.com/wiki/Angel_and_the_Ape_Vol_2_2?oldid=1531075"
Community content is available under CC-BY-SA unless otherwise noted.